All marshes near the city center, the gardens Fichaux Prés, the Archbishop, and a rich history: the St. Stephen's Cathedral, the Mansions, architecture reflecting its glorious past

Capital Cher, third largest city in the Centre Region, after Tours and Orleans, now has 66,786 (Berruyer (s)) for an urban population of 135,000 inhabitants.
In ancient times the city of Avaricum (port Yèvre) was besieged by Julius Caesar destroyed after months of siege, and rebuilt by the Romans.
In the Christian era Bourges was originally part of the Kingdom of Aquitaine and then integrated at the Royal Domain of France in 762.
On the Carolingian period the first cathedral was built on the initiative of Raoul de Turenne.
At the end of the twelfth century, a new wall was built under the leadership of Philippe Auguste.

At the same time Henri de Sully, brother of the builder of Notre Dame de Paris, began the construction of St. Stephen's Cathedral on the rocky outcrop, former site of the Roman oppidum. Work échelonnèrent 1192 in the fifteenth century.

Bourges became Capital of the Duchy of Berry privilege given by King John the Good his 3rd son, Jean de Berry

Duke Jean de Berry is surrounded by artists and artisanss, and promoted the arts, commerce developed and organized the administration of the Duchy Jacques is a supplier of Duke Jean de Berry

Jacques Coeur born between 1395 and 1400 began as peletier merchant and furrier in his father's business.
In 1427 he became manager in Under Order of the House of Coins of Bourges.

In, 1430 he founded a company to provide the Commercial Court of the King of France, Charles II then Bourges in luxury goods and scarce commodities reported in the Middle East.
Jacques Coeur after King Charles VII in Paris, appointed in 1436, and committed
High Treasurer of the King.

Developing an international trade, Bruges and Montpellier until East.

Bruges and Montpellier until East. It is knighted in 1441 and is a large land holdings: Ainay Viel, Saint Fargeau Renardières etc. ..... then began the construction of the "Big House": "The Jacques Coeur Palace."

In 1449 he lent huge sums of money to the king to finance his armies. In 1451 the fact of the power he was arrested and imprisoned by order of the King. After escaping, he died in 1456 on the island of Chios.

In the sixteenth century, Bourges radiates its University, where great humanist law professors such as: Alciat - The Douaren - Cujas teach.

In the seventeenth century the future Prince of Conde becomes Governor of Berry.

In the sixteenth century, Bourges radiates its University, where great humanists Châteauroux is named Raoul Large, son of the Ebbes Noble Prince Deols.

In 1112, Raoul Large built a castle on a hill overlooking the Indre.


During the Middle Ages developed a large drapery business. 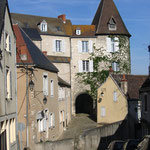 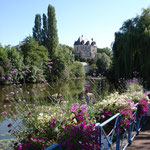 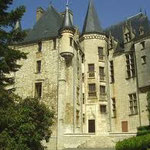